Examples of OL chronology used in other sources

Dating of the various texts in relation to other sources, archaeology, geology, genetics etc.
Post Reply
2 posts • Page 1 of 1

Examples of OL chronology used in other sources

The OL catastrophe is based on the 4.2 kiloyear event at about 2194 BC. Since both it and the other older similar event use similar titles of Altland, Atland, Altlantis, Atlantis (of which "Atlantic" Ocean i.e. 'Atlantis Ocean'), much confusion between the two is apparent from various old sources.

A good example is given by Norse Búri-Finn who at one time emerges out of the ice age prison i.e. as Fin of Bock family saga Fin (Lemminköinen), Sven and Dan Gotland story, yet is also othertimes an ancestor of Odin at seemingly 2000 BC era i.e. immediate ancestor to Wodin of OL. Another examples of the Nordic Finn/Fin theme are the Egyptian Atlas of Atlantis, called Shu (↔ "Finn" i.e. Suomi, suomalainen, Chude etc) and the corresponding North American ice age tale of Heiltsuk nation in an unfrozen land, cf. story of unfrozen ice age Hel and Suomi nation in Bock family saga. More about that here in the links about the Gutian issue.

We see the same with Greek translation of Phoenician Sanchuniathon that again mixes the Greek Atlantis and Atlas of 9600 BC with the OL Atland situation and two Finnish army groups at 2200 BC via. By losing (compressing) the time horizont this puts the stone age Atlas into same timespace as bronze age descendants of Dioscuri sailing in Mediterranean Sea i.e. descendants of Nórr and Górr sailing Mediterranean Sea as part of Tunis' navy, with the lost princess Gói implicitly taking the role of lost Helen.

But are there cases where the same chronology as in OL was used? The answer is yes, in both explicit and implicit manners. 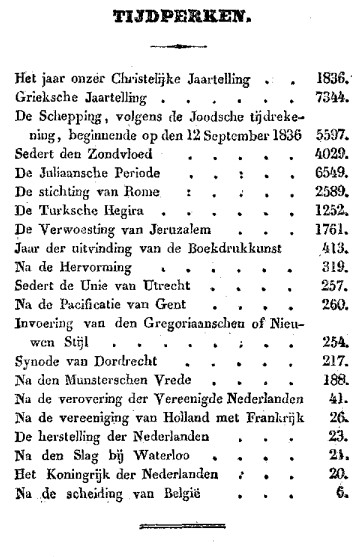 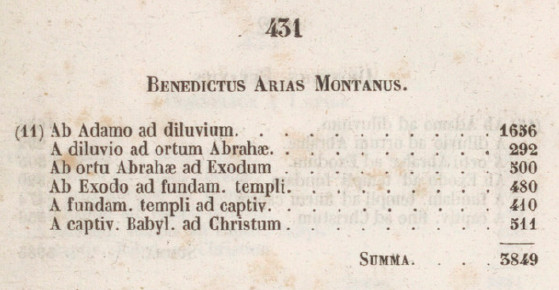 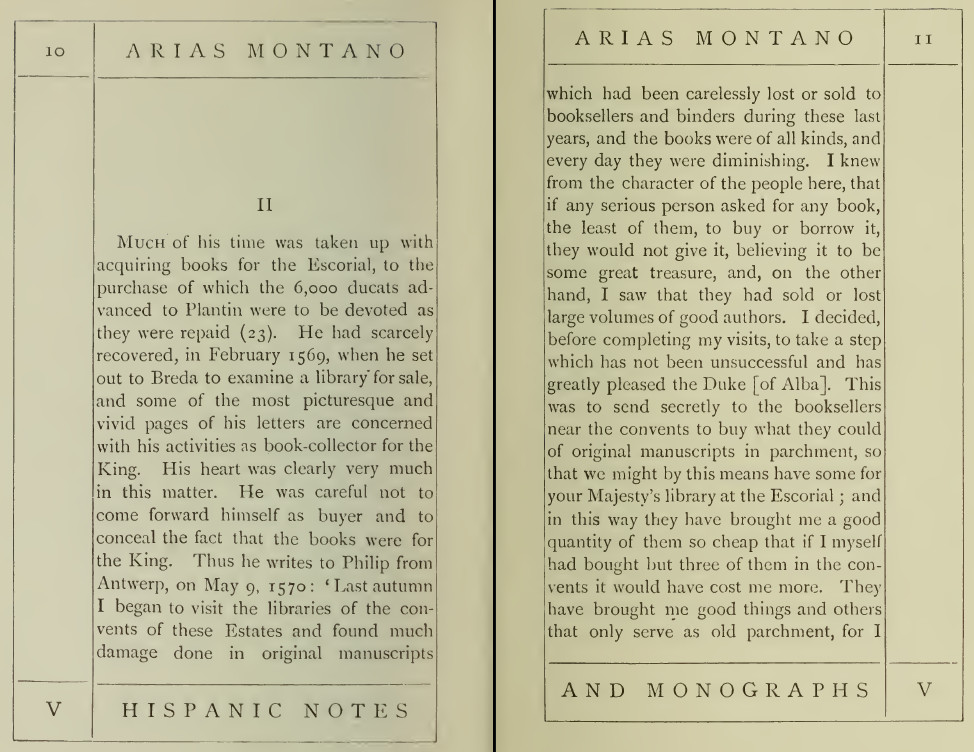 Frédéric de Brotonne lists in his work multiple different chronologies of which only the Montano one agrees with the Frisian almanac and OL. This combined with his known work in collecting old manuscripts from the same region he specifically based his chronological work on a Frisian tradition, as seen in the almanac above and OL.
Last edited by Nordic on 02 Feb 2023, 18:26, edited 3 times in total.
Top

Re: Examples of OL chronology used in other sources, part 2

Anglo-Saxon Chronicle uses a chronology where world began either at 5195 (AD 6) or 5194 BC (AD 33). This is exactly 3000 years before the OL flood date. As OL chronology's latest round begins at the notable flood point of 2194 BC, this suggest that somebody in England confused the beginning of a chronology round from a flood with the beginning of world, perhaps due to e.g. spirit of God over the waters episode in creation. Subsequently they had to rework the starting point back in time to make Biblical chronological sense and this was done by adding a neat full number in thousands. As in:
1. pre-existing OL beginning of new 6000 year chronology at 2194 BC (implicit but explicit in other sources)
2. beginning of chronology at flood mistaken for beginning of world with God's spirit over the waters (implicit)
3. a realization it won't fit the New Testament Jesus chronology, a 3000 number is added to age it (implicit).
4. the resulting chronology is used in Anglo-Saxon Chronicle (explicit).
As by-product this makes 2194 BC the exact middle or half point of this Christian 6000 year chronology.

Note that same work references the Odin and Búri-Finn tales (AD 547, AD 854) familiar from Frá Fornjóti and echoing in turn OL MS 050-056, episodes central to OL chronology. This shows that the same Christian source contains in it Norse pagan tales that do link back in pagan context to the Atlantis and Altland themes. 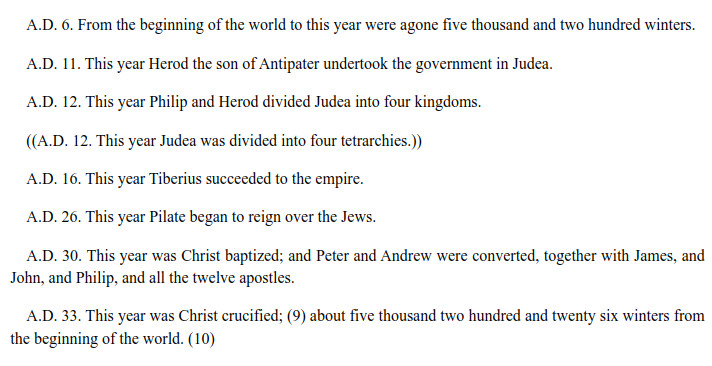 Jordanes was a AD 500s Gothic historian who told the story of vast Gothic empire under its Scythian or Finnic name Oium (Estonian Ojamaa 'Gotland'), a tale known elsewhere from Gutasaga and Hervarar saga ok Heiðreks (under the name Reiðgotaland, same as Jordanes' Gothiscandza and Oium). While Jordanes lived in a Roman Christian surroundings, the work is notable containing a pagan pan-Gothic view that includes accounts of Gothic Amazons in eastern Europe (a reality at the same Gothic Black Sea area), Gothic-Egyptian wars and likes. Jordanes' own chronology does not match with that of OL. In the end of his book he notes that:

And thus a famous kingdom and most valiant race, which had long held sway, was at last overcome in almost its two thousand and thirtieth year by that conquerer of many nations, the Emperor Justinian, through his most faithful consul Belisarius.
[Source: Jordanes, The Origin and Deeds of the Goths, ch. LX]

Belisarius may have been Gothic himself (name is not Roman, born in town Germania, famous for preferring cavalry like Goths but unlike Romans) and his Roman victory over the Goths took place in year AD 554. The Jordanes' quoted reference thus means the Oium was established in about 1477 BC. However there are textual reasons to believe this was not the original Gothic chronology, as explained below.

In Jordanes' account a noteworthy detail is the Gothic-Egyptian war of Tanausis and Vesosis. This same war is known from elsewhere under the name of Egyptian Sesostris' war on Europe. This seems to have been based on name Senusret III, who is believed to have ruled 1878-1839 BC. In Jordanes' account this war happens quite early on and it's easy to back-calculate generations to point when the grand Gothic adventure began: 1st king Berig is five generations backwards in time from the Egyptian pharaoh. If we assume an approximate date of 30 years for one generation, the story of Berig moving out of Scandinavia towards the Eastern Europe starts at 2028 to 1989 BC, or at about 2000 BC. Now this can't be a coincidence for this Berig, who moves out of Scandinavia via ships, is similar to Bergelmir of the frost giants fame who survives the flood caused by Odin and his brothers by killing Ymir. This latter episode is similar to OL story of 2194 BC flood and c. 2013 BC Wodin's successful war against the Finns (described as frost giants in Norse and Finnish echoes e.g. Fornjót lineage, Iku-Turilas as 'þurs'). This suggest that: Since the chronology in OL is detailed, refers to actual historical eras (e.g. the turn from stone age to metal age) and is also attested from elsewhere, it's reasonable to assume that the original Berig-Bergelmir chronology referred to the same root chronology. Jordanes may have been influenced by Roman Christianity, for example not fully realising Berig's original Norse saga and OL context and wanting to put them all in age later than Moses (as in e.g. Jerome's Moses of 1592 BC). This due to a Christian hierarchy of nations where Biblical Jews must predate all others so as not to clash with the Biblical origin legends. This could also be due to his textual influence from religious Cassiodorus and his Chronica work on unified Roman (Christian) and Gothic history (unlike Jordanes, Cassiodorus was not a Goth).
Top
Post Reply
2 posts • Page 1 of 1